Yaqeen Institute
by Yaqeen Institute
February 16, 2020
Disclaimer: The views, opinions, findings, and conclusions expressed in these papers and articles are strictly those of the authors. Furthermore, Yaqeen does not endorse any of the personal views of the authors on any platform. Our team is diverse on all fronts, allowing for constant, enriching dialogue that helps us produce high-quality research.

This past Friday, Imam Omar Suleiman spoke at Bernie Sanders’ rally in Mesquite, TX. In his speech, he called for “[a]n America of safety, dignity, love and unity. An America where we uplift our most vulnerable, celebrate our diversity, and unlock our collective genius.” He ended his speech by asking the audience: “Tell me what America looks like”, to which they replied the chant made popular during the nation-wide protests against the Muslim Ban, “This is what America looks like.”
In his speech, he emphasized (as he has in past op-eds) that it may seem that America has broken its promise to certain communities, that by united together, we should intend to fulfill that promise of an America of unity. prosperity. equitability. and magnanimity.
Teresa Woodard tweeted:

“Imam @omarsuleiman504 is speaking now. 'I never thought I’d speak at the Mesquite Rodeo.' He also says the crowd tonight 'is what America looks like.' #WFAA”

Although Imam Omar Suleiman has not endorsed any specific candidate, he has stated in the past:

“My work politically revolves around eliminating suffering, domestically and abroad. This shapes how I view militarism, poverty, policing, mass incarceration, environmental issues, healthcare, immigration, and torture. The Prophet (saw) said, 'find me amongst the oppressed. Are you given aid and support by Allah except by how you treat your most vulnerable?' I believe that we as Muslims, especially those who claim orthodoxy, should assert ourselves in these areas.”

Your actions echo in eternity. Act for your akhirah.

On Jan 23, Muslim Students attended the first Kentucky Muslim Day at the state’s Capital. As they were boarding their buses in Frankfort, Kentucky, a group of men equipped with megaphones and posters shouted hateful speech at the children. 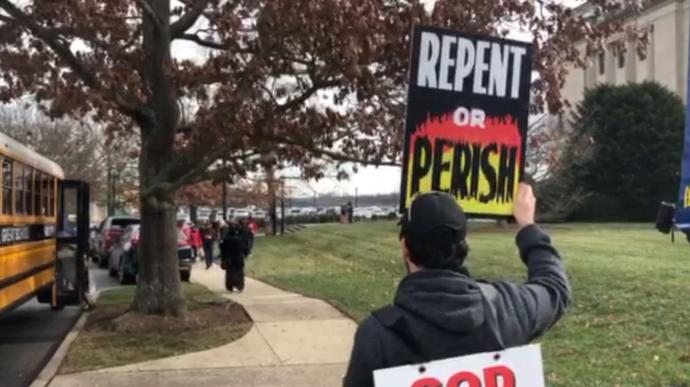